Recent trends and extreme fluctuations in Water Use Efficiency and rainfall in the South-Eastern Mediterranean Shrublands: do desert fringe ecosystems get drier?

Abstract. Mapping Water Use Efficiency is instrumental for investigating climate change and desertification in the South-Eastern Mediterranean. Relative Water Use Efficiency (RWUE) was mapped along the Mediterranean to Arid transects in Israel using Landsat images between 1994 and 2011. Classification of RWUE Time series yielded 12 multi- temporal clusters representing woodlands, shrublands, dwarf-shrublands, degraded areas, and their transitional units. Historic degradation prior to the study period was found to have the highest impact on RWUE levels. A consistent decreasing RWUE trend between 1994 and 2011 was found in 10 out of 12 clusters, of which 4 are significant at the 0.1 level, thus supporting recent indications of decreased rainfall in this region. Analysis of years with extreme rainfall fluctuations revealed that whereas rainfall decreased between 1998 and 1999 at a magnitude of 56%, RWUE decreased only between 10% and 25%, suggesting that RWUE variations underestimate rainfall changes. RWUE responses to rainfall changes vary exponentially with NDVI: shrublands with high NDVI show the lowest RWUE decline and the highest recovery rates, whereas in Desert Fringe Batha, with low NDVI there is high RWUE decline and low recovery. Thus, RWUE trends and fluctuations support the recent findings of higher aridity in desert fringe ecosystem. 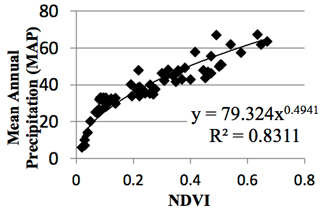 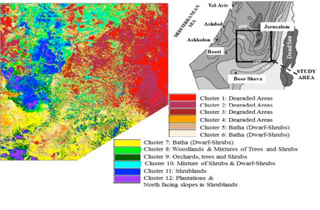 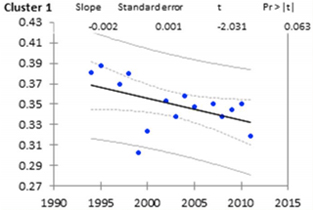