Multidate adaptive unmixing and its application to analysis of ecosystem transitions along a climatic gradient Maxim Shoshany and Tal Svoray, Remote Sensing of Environment 82 (2002) 5 –20

Environmental heterogeneity characterizes Mediterranean regions and zones of transition between humid and arid climates. Mapping of shrubs, dwarf shrubs, and herbaceous growth is of primary importance for understanding ecosystem function in these vulnerable environments. High spatial fragmentation in these three cover types implies that they are highly mixed at spatial resolutions greater than a few meters. A new methodology is presented which uses phenological differences between shrubs, dwarf shrubs, and herbs to map fractions of each at subpixel scales. To account for seasonal differences, Landsat images acquired at the end of winter and at the beginning and end of summer were analyzed. Differentiation between elementary vegetation and soil cover fractions was achieved using a well-known multispectral unmixing technique in an adaptive way. In this way, an image-based zonal partition facilitated spectral end-members selection according to seasonal variations and to climatic/biotic/lithologic transitions. The methodology was then applied to three Landsat images of an area representing a climatic gradient in the center of Israel. New maps of spatial changes in vegetation cover fractions along the climatic gradient were produced. An important element of the new data relates to the distribution of dwarf shrubs in general, and of Sacroproterium spinosium in particular. These dwarf shrubs are of major ecological significance in countries of the eastern part of the Mediterranean Basin due to their rapid invasion into abandoned fields and burnt areas.

Figure 1: Mapping of five zones of typical physiognomic combinations from color composites of shrubs (red); dwarf shrubs (green); and herbaceous growth (blue), with reference to phytogeographical units in the map modified from Danin (1988) and Sapir (1977). 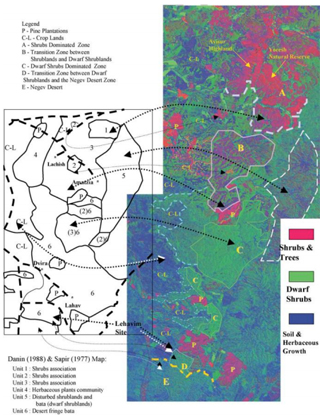 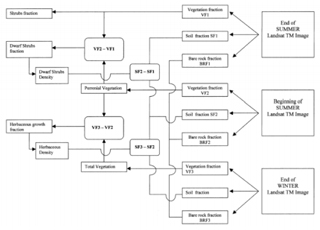