Population density in Israel during the early 1990s reached one of the highest levels (545 persons/km2) in the Western World. This study aims at assessing relationships between population and developed area (built-up and infrastructure areas) growth between 1950 and 1990, based on data collected for 6 national level districts, as well as 6 local sites in the Mount Carmel area representing a region of high ecological significance. The main findings are:(1) Population densities in developed areas were much higher than those recorded for the total district area and exhibited a continuously decreasing trend; (2) an excess of more than 50% in the growth of built-up and infrastructure areas was observed relative to population increases; (3) population densities in government owned lands (representing the majority of the lands) were significantly lower than population densities found in lands owned by the private sector; and (4) trends of developed area growth in the Mount Carmel region were similar to those observed at the national level, despite the high ecological sensitivity of this region.

Between 1948 and 1990 Israel’s population north of Beer Sheva increased 5.7- fold while the developed area increased 13.4-fold! Assuming a continuation of the exponential rate of the developed area growth, the entire Biblical and Mediterranean landscapes of Israel will become small islands in a land of concrete and asphalt within less than 100 years. 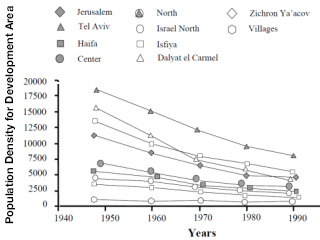