Influence of slope aspect on Mediterranean woody formations: Comparison of a semiarid and an arid site in Israel (Sternberg & Shoshany, 2001; Ecological Research

This study investigates the effects of slope aspect on plant community characteristics such as plant cover, species composition and above-ground biomass production in Mediterranean trees and shrubs in two climatological regions. Two experimental sites were selected in a climatic gradient that runs from the foothills of the Judean Hills to the northern Negev desert in Israel. In each site, 16 quadrats of 10m¥ 10 m (eight south-facing and eight north-facing slopes) were established and the vegetation was recorded. Dominant tree and shrub species were measured using allometric parameters of area and volume, and representative branches were cut and weighed. Species studied were Quercus calliprinos, Phillyrea latifolia, Pistacia lentiscus, Cistus creticus, Coridothymus capitatus, and Sarcopoteriumspinosum. The results showed that slope aspect had significant effects on the composition, structure and density of the plant communities developing in both sites. Vegetation structure within a site changed significantly in the short distance separating the north and south- facing slopes, and that pattern remained generally constant when comparing the two sites along the rainfall gradient. The data collected here provides new insight into the slope aspect effects on biomass allocation of different woody life forms of eastern Mediterranean plant communities.

A remote sensing methodology for herbaceous areal above-ground biomass (AAB) estimation in a heterogeneous Mediterranean environment is presented. The methodology is based on an adaptation of the semiempirical water–cloud backscatter model to complex vegetation canopies combined with shrubs, dwarf shrubs, and herbaceous plants. The model included usage of the green leaf biomass volumetric density as a canopy descriptor and of cover fractions derived from unmixing Landsat Thematic Mapper image data for the three vegetation formations. The inclusion of the unmixed cover fractions improves modeling synthetic aperture radar backscatter, as it allows separation between the different radiation interaction mechanisms. The method was first assessed with reference to the reproduction of the backscatter from the vegetation formations. In the next phase, the accuracy of AAB retrievals from the backscatter data was evaluated. Results of testing the methodology in a region of climatic gradient in central Israel have shown a good correspondencbetween observed and predicted AAB values ( 2 = 0 82). This indicates that the methodology developed may lay a basis for mapping important and more advanced ecological information such as primary production and contribute to better understanding of processes in Mediterranean and semiarid regions.

Two approaches to biomass mapping of shrublands across sub-humid and arid transition zones are integrated. The first generalizes relationships between biomass and precipitation from sites in the Mediterranean Basin, California, Namibia and Mongolia. The second represents existing Normalized Difference Vegetation Index (NDVI)-based models for biomass estimation on a regional scale. A new modified NDVI-based model is presented that uses relative rain availability as the ratio between the mean annual precipitation and the threshold rain level representing the transition from herbaceous growth to shrub dominance. While the data accounts for the actual vegetation cover, the relative rain parameter accounts for the potential biomass production. Implementation of the modified relative rain model with Landsat imagery of climatic gradients (the east-west gradient between the Judean Mountains and the Judean desert and the north-south gradient between the Judean Mountains and the Negev Desert) yielded realistic estimates of biomass in areas of high human disturbance to the natural ecosystems. These results support the possibility that the modified model can be used to map biomass across wide Mediterranean and desert-fringe ecosystems.

Information on shrubland biomass across wide semi-arid regions is of limited availability. A new model is presented that estimates shrubland biomass based on biomass-pattern-precipitation relationships. The model uses a pattern parameterization that represents the effect of the shrub patches’ spatial arrangement on their water use efficiency. Shrubland biomass productivity is then estimated by modulating rainfall availability along climatic gradients by this Pattern Water Use Efficiency. Preliminary assessment of the new model was achieved by comparing its results with biomass as extracted from high-resolution imagery based on allometric equations. This assessment utilized ten high-resolution images acquired from an ultralight aircraft flying at low altitude over sites between the Northern Negev (100 mm annualrainfall) in the south and Avisur Highland in the north (500 mm annual rainfall).

New Version of the PWUE Model is presented in PWUE page

Other Publications on Biomass Mapping: 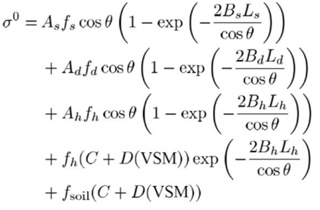 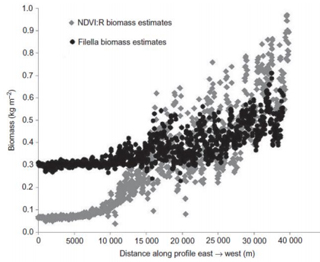 An east-to-west cross-section from the Kalia area to the Jerusalem Mountains, representing biomass estimates from the Filella et al. (2004) model versus those from the NDVI:R model. 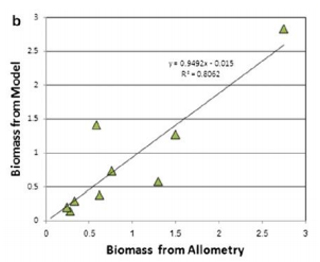 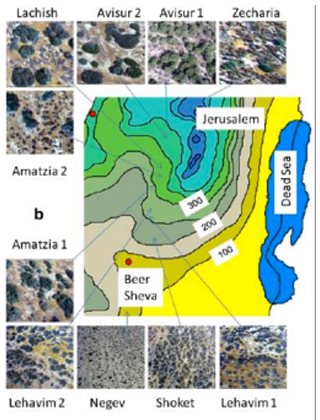