The proposed study will implement geosimulation based on a cellular automata technique representing modes of shrub extension and spread as well as the formation of soil property gradients representing spatial embeddedness. The parameters for simulating a wide range of scenarios, combined by different rates and modes of positive and negative embeddedness, are derived from exciting published studies as well as from remote sensing. The remote sensing part includes close-range imaging using sensors in the visible, NIR, and thermal wavelength bands as well as processing historical aerial photographs for assessing the climatic gradient of the Judean mountains incentral Israel. Similarities/ dissimilarities in modes of change in embedded soil forms and shrub patch patterns will be analyzed for assessing the local as well as the converging and diverging forms of self-organization. 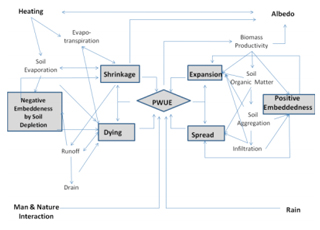 Schematic description of the plant-soil system facilitating the evolution of positive and negative Embeddedness. 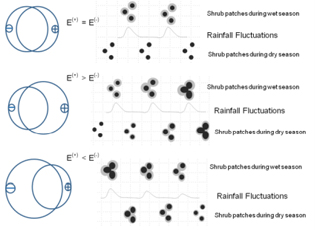