Mutual variations in soil and vegetation pattern characteristics have not received much attention despite their role in the evolution of eco-geomorphic systems. During recovery vegetation would characteristically spread, expand and aggregate while the soil areas will go through perforation, dissection, fragmentation, shrinkage and attrition. On the other hand, during disturbance the fragmentation of the vegetation patches, their contraction and removal will cause exposure of the soil to rainfall and the potential increase of erosion. These processes are complex and non-linear and understanding them requires parameterizing soil and vegetation pattern changes. Five landscape metrics were employed to characterize complementary soil and vegetation patterns over a wide range of patch densities, their number, size heterogeneity, shape and dominance. Data regarding these processes is scarce since they may take decades to go through full cycles and frequently eco-geomorphic systems will fluctuate between a limited range of degradation and recovery levels. For gaining understanding of the full processes we had developed a Cellular Automata simulation allowing representation of different strategies of vegetation recovery in dependence with soil conditions. These strategies are realized through the use of adhessive (contiguous) growth probability. In parallel, we developed a reconstruction technique allowing extraction of information regarding past patterns from single-date air-photographs. Changes in the simulated and reconstructed patterns were parameterized by employing these metrics facilitating better understanding of the effect of growth strategies on the soil-vegetation pattern relationships. Similarities between modes of pattern change between simulated and reconstructed forms are indicative of the critical role of adhessive growth representing embedded memory and self- organization. Furthermore, adhessive growth represents the effect of patches’ edge areas on the Pattern Water Use efficiency and productivity of desert fringe ecosystems.

A quantitative analysis is presented, of soil and vegetation patch patterns from air photographs of three dates (1956, 1976 and 1990). Relationships between changes in soil cover and landscape fragmentation are assessed for north- and south-facing slope units in the semi-arid zone of Israel undergoing recovery following severe overgrazing and woodcutting phases. Soil loss accompanied by an increase in rock fragment exposure, and an increase in soil erodibility due to a decrease in aggregate size and organic matter content are the two main characteristics of soil changes in this area. Changes in both of these characteristics are highly correlated with soil brightness properties as recorded from aerial photographs. The methodology developed combines image processing techniques, enabling differentiation between soil and vegetation patches, with raster Geographical Information Systems (GIS) techniques, allowing patch distribution, fragmentation and form to be analyzed. Expansion of vegetation patches and contraction of soil patches were found to follow similar lines of spatial pattern evolution when parameterized according to their size, form and density. Assessment of temporal changes in soil and vegetation patch composition indicated that there is a phase difference of 12 years between the processes taking place on the two slope units. Hypothetical descriptions of soil patch fragmentation and vegetation patch expansion processes between 1920 and 2010 were formulated following the analysis of data between 1956 and 1990. Evidence of soil brightness changes provided indications for the continuation of soil loss, mainly in large patches (a few thousands of square meters in size) undergoing relatively slow fragmentation. 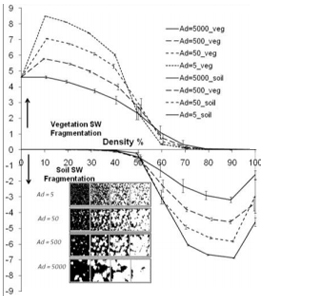 Geosimulation (above) and Reconstruction (below) of Patterns and their parameterization using Shannon Weiner Fragmentation Index for soil and vegeation along a full recovery path. 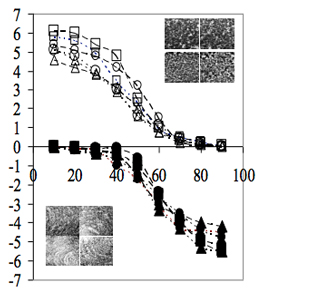 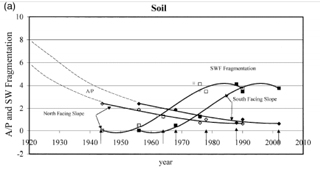 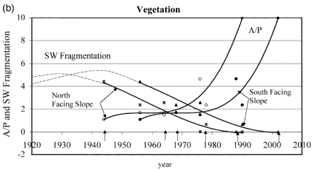 Temporal changes in soil and vegetation fragmentation and A/P ratio for the north and south facing slope units. Solid curved lines represent 3rd degree polynomial fitting to data points (including interpolated data points marked with arrows). Broken lines represent hypothetical changes for 1920 and 1940 according to the observed data after 1956.